Toni, Dash, and I just returned from our trip to New York City, where we visited with friends, shopped a little, and saw the sights.  I had only been to NYC twice before (and neither time for very long); however, Toni used to live there, and I was really looking forward to seeing the city through her eyes – as well as watching Dash take it all in for the first time.  This was also our first vacation together as a family, and all of us were in need, I think, of some time away from our “normal” existence – a chance to see things through a new perspective as visiting a new place can only help you do.

There’s nothing like taking a baby into the big city to do all that.

If you read happydash.com at all, then you already have the sense that we are blessed with an unbelievably sweet (and almost universally happy) son.  I love taking him to new places, watching how he takes in an entirely new experience.  It gives me some clues about how we’re meant to interact with the world – seeing how he observes, remains neutral, and then – nearly every time – smiles at whatever/whomever he’s just met.  I think that he’s taken my typically optimistic view on life to an entirely new level, in just a short almost-7 months of existence.

For me, the things that I tend to find the most rewarding involve human contact.  Sure, physical contact is nice, but I’m also talking about that feeling that you get when you and another person have managed to truly communicate and touch, within each other, that spot where your soul, your common humanity, resides.  You share something meaningful, you smile, you get the sense that, at least in this moment, you really KNOW that person.  And they know you back.  That’s the kind of thing that makes me really grateful to be alive, to be a human on this here planet.

So I was actually kind of nervous about going to NYC.  The couple times I had been there before were fun enough, but I still couldn’t shake Jim Croce’s soundtrack from my mind (that’s the reason that I gotta get outta here…I’m so alone…etc.).  It’s not that I didn’t find New York to be exciting, but more that the people I would see there seemed so isolated and shut down by the sheer volume of other people/stimulation that I would find it difficult to be who I am – open, communicative…friendly.

Initially, as Toni and I carried Dash into the city, I was prepared to defend Dash from the barrage of the city and any negativity he might encounter.  From the moment we stepped onto our first subway train, however, I could tell that things were going to be VERY different during this NYC experience.  No sooner had we walked onto the subway car than someone immediately got up to offer Toni (who had Dash at the moment) his seat. Amazing!

And then Dash did what I always do – he started scanning the faces of the people around him on the subway.  So many people – so many different lives all intersecting at that one moment.

Now most of you probably have experienced the “subway stare” – which is essentially that other people on the train stare off into space ahead of them, doing their best to pretend that they are anywhere but right there with you.  You almost NEVER get eye contact or a smile – and when you do it’s more often than not c-r-e-e-p-y.  But this experience with Dash was entirely different.  As HE glanced around that subway car everyone else glanced back.  As HE smiled at people they all couldn’t help but smile.  As he looked, smiling, back-and-forth from these new people to his parents, these other people made eye contact with us, as well, smiling, nodding, and clearly enjoying the moment.  In those first few minutes of New York City life, my son had managed to transform the lives of all the people on the subway with him – including ours. 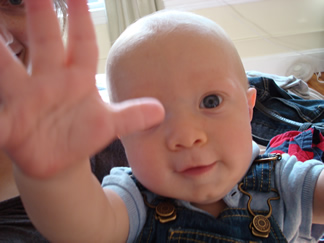 Dash has this thing that he does – we call it “magic hands” – where essentially he holds his hands out, arms outstretched, and makes these slow, mystical motions, as if he’s conjuring up the world in front of him.  We joke about how he must think that he’s controlling his experience through these intentional, deliberate gestures.  In those moments on the subway it was clear that he was, in fact, the master of all that was happening before him.  And we were all much better for having been mastered.

That wasn’t the only mystical experience we had in the city, of course.  For now, however, I’ll leave you all with this photo from our Union Square experience – watching a spiritual healing take place.  The guy in the yellow is the one getting healed, the one with the dreads is the one doing the healing.  Of course as the whole thing went down we had no idea what was happening – we just watched the giant dreadlocked fellow select a spot (about 20 feet away from us), sit down with his…healee(?), and, out of nowhere, generate these bursts of sound – some of the purest tone that I have ever heard come from a human being – which were directed at the healee.  If not healed myself, I certainly felt intrigued (which is how I even know what was going on – since I asked the yellow-shirted guy about it after the healer had gone off to kiss all the trees in the park). 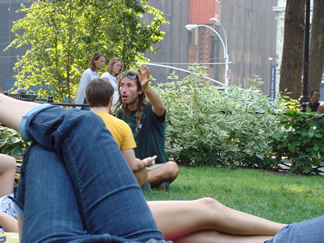 New York City is a spiritual place.  That dreadlocked 7-foot-tall healer practiced handstands next to us for about 10 minutes after he completed the aforementioned round of tree-kissing.  Yes, it’s a spiritual place, and I’m not going to let the fact that the dreadlocked dude got suddenly got a call on his cellphone change my mind about it. 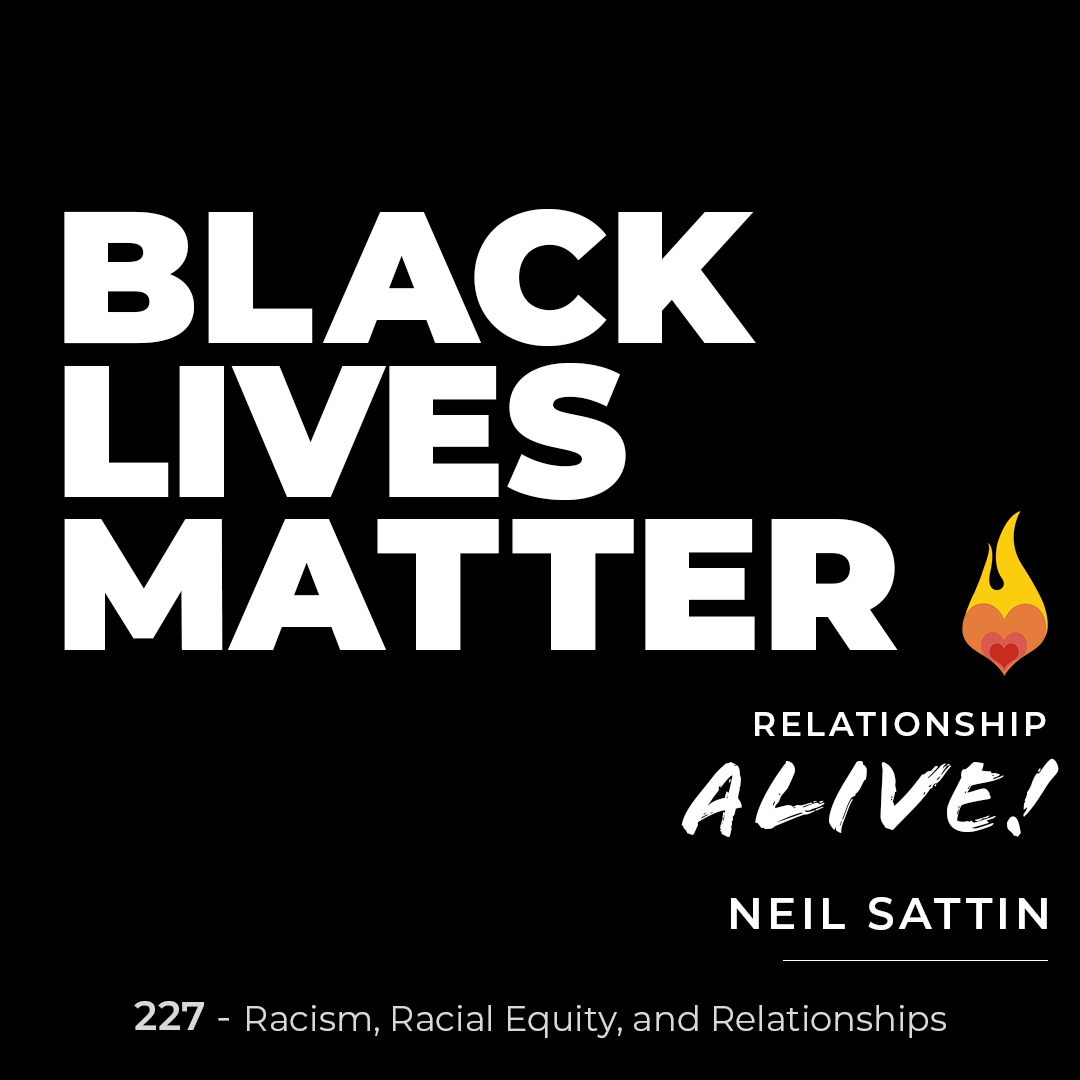