After four years, the wait is finally over – “free listening” made its debut earlier today in Post Office Park, in Portland, Maine.  The premise is simple – I set up a couple of chairs in a visible location in the park, posted a sign offering “Free Listening & Free Advice (if desired)…donations accepted”, and waited for takers (see photo).  If there’s  ever been a case study in why the “ready, fire, aim” approach works, my experience today was it, for the actual experience of sitting in the park and listening (and advising) passers-by was WAY different than how I had been imagining it for the past four years. 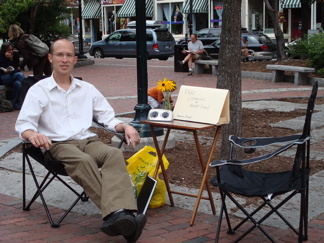 Let me start by saying that I did have some willing talkers – fewer than I had hoped for, but SOME.  While the people who sat down (all men, with the exception of one woman) all seemed initially to be participating mostly for curiosity’s sake, by the end of the time we shared (generally about 10-15 minutes per person) it seemed that our conversation had been genuinely beneficial.  My intention WAS to actually be helpful to people, through listening and providing feedback when desired – not just to pursue some novel idea (though that was certainly part of what motivated me).  So I was pretty psyched to have these random people, who sat down not knowing what to expect (just like I had no idea what to expect), thanking me for the time – in many cases, just for listening to them for that quarter of an hour.  It all would start with my asking “so, what would you like to talk about?” – simple enough, but establishing that the next 15 minutes would be all about whatever this person wanted them to be about.

So here are some of the things that I learned, and things I’ll be pondering before my next outing:

Overall, the experience was very positive for me (and, I believe, for the people I met). While I look forward to spending a few more afternoons in the park, I think that ultimately I’ll be more effective through this website (plus it makes earning an income that much easier, as I can have advertisers instead of relying exclusively on donations).  In that spirit, if you have anything you’d like to talk about – drop me a line (neil at neilsattin dot com), and we’ll reserve a post just for YOU on this site.  Thanks for listening!  🙂